After a long day of work, they like to lose their goose at home and pamper themselves where they might get lazy but still manage to do that in a charming way.

Despite the fact that they can earn loads of money, their extravagant lifestyle leaves them in debt at times. But they never seem to get around the fact that saving for time ahead and are mostly found kicking it somewhere on the beach or any good areas.

They have an innate desire to help others and with the combination of smooth velvety personality and silver – tongued speech they vastly prosper in sales and marketing field making people believe them. Since some of them lack the driving force which is essential in workplace, they are inclined to settle for the status quo.

Some of them have an appetite to take risks which ends them in investing in a risky venture but due to their high confidence level and self-reliance but somehow due to their buoyancy they are able to pull themselves out from deep waters.

Below their magnetic personality they have a hot temper where their assault comes as a sharp woofed counter in a heated debate at times. Because of their attractive charisma they manage to steal the spotlight which is very important for them.

As far as relationships are concerned, their partners because of their zest feel like that they are the only one sooner or later they have to make peace with the fact that there are many feeling the same way. In their defence, they are not double crosser, but they have a hard time to not fall prey to snow job.

Their trademark trait, their passionate nature is evident in ascending baselines, characterised by long, high heavy strokes and exclamation marked made with high pressure. Overall, they have a graceful style to their writing. 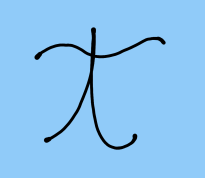 Their flirtatious nature can be seen in forward stroke writing and scroll shaped cross strokes.